Another week in Wilmington!

Sunday, I enjoyed singing with the choir again at St Mark’s.  Then I spent a little time shopping before returning to the boat.

We didn’t receive the parts we wanted until Tuesday and Wednesday.  So spent the first couple days cleaning, again.  We are cleaning the outside of the boat as well while we have unlimited water, and it needs it.

Wednesday night, Dave was trying to finish a project outside.  He was making a hole in the transom for an electrical through hull.  It was getting dark and the bugs were biting.  So he was trying to hurry.  He was drilling on the outside with his left hand and holding back a hose on the inside of the lazarette (storage areas in the cockpit).  As the drill bit went through the fiberglass, it caught a piece of uncut fiberglass and went right for Dave’s finger.    It went into his first finger on his right hand at the nail bed.  He came inside, and I cleaned it and bandaged it right about the time he thought he was going to faint.  I gave him a cold wet cloth for his head and started fanning him while he had his head between his legs in our aft head.  I wasn’t sure what I was going to do with him if he did faint.  It would have been awkward to get him to lie down from there.  But he came through OK.  He still went out and finished the job. 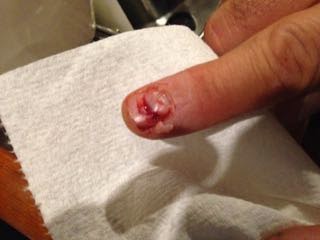 Thursday, we were going to return our rental car, since things were wrapping up.  But I was feeling kind of claustrophobic without it.  I have gotten spoiled having it.  Since we feel “stuck” here, the car has been my “escape”.  So we talked through the reality of leaving here by the weekend, and decided it wasn’t going to happen.  Then we hopped in the car and went out for breakfast.

I was able to go to choir practice on Thursday night.  That  always lifts my spirits.

On Friday, we thought we were going to have our sea trial, where we take the boat out with the boat yard mechanics and test all the systems that were replaced.  The electrical man called about 8:30 and asked us to start the engine about 9:45 to let it run about 30 minutes before it would be tested.  Well it was blowing about 15 knots, so I wondered if we would actually take the boat out.  Since we are on a river and the tide affects the area, it can be difficult to get back into your ship on a windy day.  Well, the engine mechanic came and tested a few things.  But he said he wanted to come back on Monday when the engine was cold for another test.  And he would have to have access to our batteries (in the back of our “garage”).  So that was it for a sea trial today.  We were kind of pissed off, because this part could have been done today had we been better informed on what he needed access to.  We had things tucked away thinking we were heading out to sea.  Had we known he needed to have access to the batteries, we would have had that ready for him.  POOR COMMUNICATION at our expense.

Dave spent part of the day “cleaning our fuel”.  I think I mentioned this before, but we have “algae excrement” in the fuel in our jerry cans.  When he noticed new crud in our new jerry cans, he decided we needed to do more.  If this is what we are getting at a station in Wilmington, what will we get in the Bahamas and beyond?  Now Dave is concerned about the fuel in our tank.  Our neighbor, who has been sailing around the world for over 20 years, said he has always used a Baja filter along with a biocide.  Well, we have a Baja filter with one screen, but they don’t make the one our neighbor uses anymore, the Grand daddy with 3 screens.  After more research, we decided to buy a portable fuel polisher-a pump with a couple filters, along with using a biocide.  When you polish the fuel, it runs through a couple filters to clean all the gunk that could have come from the fuel source or has grown in your tank, and it removes water from the fuel.  Dave said it also has a “voodoo filter” that lines up the fuel gremlins and marches them right out of the tank, making the fuel even more efficient.  We inquired at our marina and it would cost us about $500 to polish our fuel.  So we feel comfortable that our own polisher will pay for itself.  And we’ll sleep better thinking we are preventing our engine from stalling with clogged filters.  The fuel runs through the polisher and back into our tank.  The process takes about an hour.  And we will do this occasionally, especially after we've been out to sea, because the fuel will have been "stirred up" from the movement of the boat.

I, on the other hand, went to see a matinee movie.  I had just read The Best of Me by Nicholas Sparks and didn’t realize it was showing in the theaters.  I picked up the book at our marina.  The laundry room has a book exchange area.  Since many Nicholas Sparks’ books take place in North Carolina, I felt I should read one of his books while I was here.  The location in the book was Oriental, NC.  But the movie location was Louisiana.  It was a typical N Sparks love story, but just what I needed.

Afterwards, I pulled Dave off of the boat to go out to dinner.  I swear, he would never leave the boat unless he needed a boat part.  Our neighbors had recommended Elizabeth’s Pizza.  It is in a strip mall, but you would never know it once you step inside.  And they had Dave’s favorite wine, Lambrusco, from his brown bag days.  It’s just a sweet, fruity red wine, like Dave, sweet and fruity.
Posted by svluckofafool at 3:57 PM