Dave had an appointment with the VA in St Augustine, Fl on Monday, so we decided to take a road trip.  We were hoping to be there by boat by now, but we improvised.

Rather than driving there and back in 2 days, we decided to leave on Saturday.  I went to work researching what else we could do between NC and St Augustine.  We have been told that St Mary’s inlet on the southern border of Georgia is a great place to go by boat.  So I checked into what we could do there.  I found the “Woodbine Opry”.  Woodbine, GA is a little town of about 1400 people about an hour north of Jacksonville, FL.  We decided to spend Saturday night there.

Saturday morning, we left the boat by 8:00 am and stopped at the first little diner we could find on our way out of town.  We went to Shirley’s Diner in Belville, across the river to the west of Wilmington.  There was a sign outside that said “Fresh Spot”.  So we had to ask.  Spot is a local fish.  It was on the lunch menu, but they offered to make it for Dave for breakfast.  He loved it.

We decided to follow the coast for awhile and go through Myrtle Beach.  We won’t go through there by boat, so we thought this would be our chance to see why it’s so popular.  AND there is a Margaritaville in Myrtle Beach.  I am trying to see as many of them as I can.  Now I am up to 12.  Myrtle Beach is REALLY commercialized.  Not a beach we would visit. 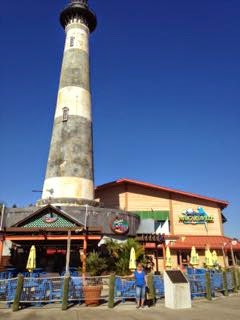 We arrived in Woodbine about 4:00.  We decided to stay in the only hotel in town, the Stardust motel.  It was really old, probably built in the 50’s.  But it was very clean and cheap, $40.  We walked 4 blocks to Captain Stan’s Smokehouse.  It was an old place with a small indoor seating area.  But the majority of the place was outside with partial roofing around the outside and a  parachute hanging in a tree for another part, and a tarp over the bar.  There was a fire pit in the center with picnic tables around it.  The reviews really bragged up the ribs, so we had to try them.  We ordered a full rack to share with one side of potato salad to share.  They were huge and amazing.  We each had 3 ribs, couldn’t eat them all and took 4 ribs home with us.  While we were eating, a band was setting up and started playing about 6:00.  They were a fantastic bluegrass band.  It was hard to leave, but we came here for the Opry and decided to come back before they finished for the night. 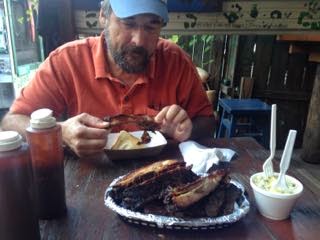 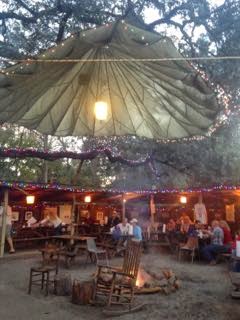 We walked back to the motel and dropped off our ribs.  Then we walked about 4 blocks in the other direction to go to the Woodbine Opry.  It was held in the community center that was the old high school.  It started as a fundraiser years ago and the musicians decided to continue the fun.  Every Friday night, they have a bluegrass jam session and old time country music on Saturday nights.  There were about 6 musicians on the stage when we arrived a little after 7:00.  There was theater seating and room down front for people to dance.  We just stood in the doorway a few minutes taking it all in and a guy came up to us to show us to an open seat.  He asked if it was our first time and led us to two open seats down front.  We sat next to an elderly couple and found out their son was playing the steel guitar on stage.  He had to be at least 65 or 70 and his parents close to 90.  A guy in front of us introduced himself and told us all about the event.  A friend of his was playing violin and singing.  He used to play with Loretta Lynn.  He said all the musicians come here every week from Jacksonville.  They pass a hat to help cover their travel expenses.  They also sold raffle tickets for baked goods and had a 50/50 drawing.  We weren’t sure how late we’d stay, so we didn’t buy any tickets.

The music was unbelievably good.  They took turns singing and accompanying each other.  And everyone had so much fun dancing.  You could tell they all new each other and took turns dancing with each other.  We had fun dancing, too.  I had a permanent smile on my face.  We were probably the youngest in the crowd.

At 9:00, the band took a break.  They turned up the house lights and the leader took the microphone.  We had e-mailed him to ask about reservations and cost.  He returned our e-mail to let us know it was free.  Bob asked if there were any first time visitors.  They went around the place and had everyone say their names and where they were from.  Someone was videotaping the whole thing.  Rapid City, SD really got some reactions from the crowd.  Then they had the drawings for the baked goods.  About half way through, the guy that won told the “couple from South Dakota” to pick out something for themselves.  So Dave picked up a plate of pistachio bread.  Later, while we were getting a cup of decaf coffee at their snack bar, a guy had to tell us he had driven truck to Sioux Falls, SD.  By the water fountain, there was a sign posted “caution, this water can cause romance”.  It was a joke because there were several couples who met there and ended up getting married.  It was just an all around, good clean fun loving bunch of people.  They have a website www.thewoodbineopry.com.  And the video of our introduction is supposed to be on there.  Maybe other photos of the evening, too.  I would highly recommend this to anyone that would be in the area.  It is a little piece of America that you don’t usually get to see.

dark part is Dave singing to me


We left the Opry about 9:30 and went back to Captain Stan’s for the last set of the bluegrass band.  It was still a beautiful night to be sitting outside.  Everyone at the bar was very welcoming, too.  Our waitress and the bar maid welcomed us back.  Another guy invited us to sit by the fire pit.  As we were leaving about 10:30, one of the musicians from the Opry stopped us.  He knew this band was good and came to listen after they finished.  He walked out to his car as we were leaving and gave us 2 of his CD’s.  He didn’t want anything for them since we were visitors.  It was his gift.  We just couldn’t get over how so many people went out of their way to welcome us and how 2 people gave us gifts.  We will be back some day. 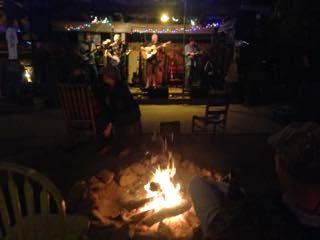 Sunday, we headed to St Augustine and were able to check into our Holiday Inn early.  Just a lazy day.  I guess we spent our fun tickets yesterday.  I went to church at 5:00 and picked up Thai food on the way back to the room.

Monday, Dave had his “new patient interview” with the VA, since this is a new clinic for him.  Plus he had to do the blood work for his exam later in November.  I read a book.  Then we headed back to Wilmington.  We stopped for dinner about 7:00 and decided to spend the night in Florence, NC.  We’re getting lazy.  Plus we were still waiting for the insurance OK on the last parts we need for he boat.

Tuesday, arrived back at the boat and made a plan for what needed to be done on our part to be able to leave here when the boat is finished with repairs.  Then set to work (at least that what I am saying we did).


Posted by svluckofafool at 8:57 AM