Dave’s Stepfather’s funeral isn’t going to be until Sept 4.  His body was donated to the Mayo Clinic for research, so they decided to have the funeral on Hap and Alice’s 41st wedding anniversary.

Dave spent Wed, Thurs, and Friday helping his mother organize finances with appointments and phone calls.  Wed, Pete, Alice and I went on a shopping trip to Mankato.  It was nice that Pete could spend time with Alice this week.

On Saturday, Dave and I went to Minneapolis to spend some time with the Clausen’s, Joe and Erin.  Dave helped them with some household projects on Sunday while I drove to Wyoming, MN to see a dental school classmate for a few hours.  (All this was last minute plans, so sorry Jerry and Barb that we didn’t get together with you.)  On Monday, the Clausen’s had a family Labor Day picnic.  We knew the Clausen side, but were able to meet some of Erin’s family.  Fun day.  Tuesday, Dave and I spent several hours talking through all the options for our traveling over the next month.  Dave is going crazy with nothing to do after one week.  And all he thinks about is what he could be doing on the boat.  So we came to the decision that he will return to North Carolina after the funeral and I will stay until the end of September for my class reunion and family reunion.  My sister and husband, Janice and Jim, are coming to Hap’s wake and funeral.  Then I will go to Aberdeen with them, borrow a car, and spend a month touring the state with friends and family. 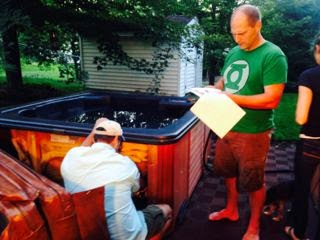 Wednesday: we returned to LeSueur for the visitation at the Funeral Home from 4-8:00pm.  Hap was an avid hunter up until about 2 years ago.  For the past few years, the family made orange t-shirts with deer hunting logos and Hap’s name.  So all the family members wore them to the wake.  It was a great way to be able to tell who the family members were.  Hap had 6 children (one passed away with cancer) and 3 step children.  So there were many grand children and great grandchildren there, too.  Hap touched a lot of lives living his entire 92 years in LeSueur, except for his years in the Navy.  He was a WWII veteran.   There were a lot of fun stories shared that night.


Thursday:  The funeral was held at Alice’s church and was a beautiful service, with Hap’s 3 daughters speaking.  There was a 21 gun salute and the grandchildren released balloons.  Then there was a fantastic meal served by the church.  After the meal, I said my good-bye’s and headed for Aberdeen with my sister.

We arrived in Aberdeen in time to have dinner with my niece and her family, Heidi and Glen Crawford, Garrett and Claire.  They didn’t tell the kids who they were having dinner with.  When they arrived at the restaurant, they all gave me hugs.  Then the first thing the kids said was “where’s uncle Dave?’  They were able to talk to him on the phone before they left.  They are growing up so fast, 1st and 3rd grade now.  Wish I would have taken a picture.


Posted by svluckofafool at 1:43 PM