Our new circuit breaker arrived, but we had to pick it up at an electronics store a few blocks from here.  Dave still wanted his southern fried chicken, so we thought we’d go out for lunch.  We had walked by Jestine’s Kitchen a couple times and finally looked it up on the internet.  This was exactly what we were looking for.

Jestine’s was named after Jestine Matthews, born 1885 and lived to 112.  In 1928 she went to work for the Ellison family.  Jestine’s Kitchen is owned by the Ellison’s grand daughter.  They played music from the 30’s-40’s, like you would have heard in the south.  Jestine’s table wine was their sweet tea.  Dave ordered the fried chicken dinner.  It came with 3 huge pieces, a breast (which we took home), thigh and leg.  His sides were mashed potatoes and gravy and okra gumbo.  I had a pecan crusted chicken breast with the okra gumbo and black eyed peas.  They brought us a bowl of sweet pickles before our meal.  They had t-shirts with 10 questions asked at Jestine’s.  Some of them were “what’s fried orca, how big is the 4 oz meatloaf, what’s the difference between the 4 and the 8 oz meatloaf, are you Justine, which beach is closest to the ocean?”

After walking home in the heat and humidity of the day, and after a big meal, I had to take a shower and a nap, just because I can.  Maybe going out for lunch wasn’t such a great idea.  (Or maybe it was the big meal.  I felt fine after my salad yesterday.)

We met an older sailor from the south that once told us “if your projects aren’t done by 10:00 am, they aren’t going to get done.”  Now I think I know why he said that. 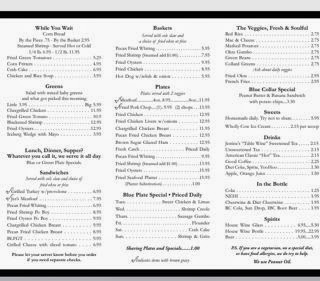 Posted by svluckofafool at 7:04 PM