After our late night last night, we were pretty lazy today.  We just hung out at the boat researching things on the computer and cooking.

We regrouped with the neighbors to watch the fireworks.  They launch the fireworks from the USS Yorktown air craft carrier across the river from our marina.  Our neighbor that had lived here for 5 years told us that over a week ago.  But we never thought we’d still be here for the 4th.

We put our cockpit cushions on the deck of the boat and had a great view.  I played my John Phillip Sousa CD of marches during the display.  Have to play that on the 4th every year.  There was a real patriotic feeling in the air when you think about how many battles had been fought in this harbor.

After the fireworks, I joined the new neighbors from New York.  They have a 50 foot boat.  Wow, is it ever spacious compared to ours.  I shouldn’t  look at boats that are bigger than ours.  But we wouldn’t want to handle that large of a boat by ourselves.

The owners bought the boat in the Baja area of Mexico.  They hired someone to take it through the Panama Canal and bring it to Florida.  They joined the captain and a crew member there and they all came here together,  along with a nephew.  Captain Kirk and crew, Burt, are from the Netherlands.  Kirk left a couple days ago, but Burt will be with them as they move the boat north.

I had a great conversation asking them all about choosing a captain and crew AND how you become captain and crew.  Dave and I have thought about doing that as a supplemental income- move boats for people.  Of course we would need more training and experience, so it’s not going to happen soon.  But what I learned tonight was that you have to deal with a lot of mechanical issues.  Especially if a boat has been out of the water for several years and now you are taking it somewhere for the owner.  All kinds of things can show up once it’s in the water again.  You can also return boats for people after they have sailed it somewhere and don’t have the time to bring it back.  Then you would know that it was a working boat ( and you can still have mechanical issues).  So we'll see if we ever go that route.
Happy Fourth of July! 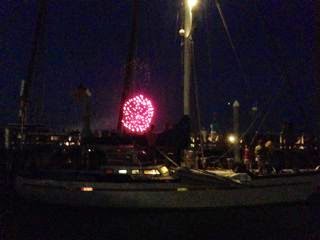 Posted by svluckofafool at 12:12 PM