Since we have no schedule or place we HAVE to be, the weather is the major influence on when and where we go.  We want to “go on the outside” when we leave here instead of the ICW, so we decided to wait out the weekend squalls that were predicted.  So today, I took advantage of our extra, unplanned time, and found someone who could get me in for a massage.  Those stubborn muscles still remember that I sat in a dental chair for over 25 years.

Dave’s indulgence has been watching the World Cup.  He’s been watching the games on the computer, since we have an internet connection in the marina.  I am making him explain to me how he is determining that the weather is unfavorable for us to leave.  Partly so I can learn and help with that decision, and partly to be sure we’re not staying just so he can watch the World Cup.

On Friday evening, we had friends from Marathon stop over for happy hour (Miami and Shelly).  They left Marathon a week after we did and caught up with us here.  They are going to continue going north on the ICW, since they only have a 4 foot draft, ours is 5 foot.  Plus they have a destination with a time element attached.  Of course, Miami had to give Dave a hard time about not leaving.

That evening, we went back to our favorite Italian/people watching restaurant.  Hard to try something new when we were so impressed with this place (and love the leftovers).

On Saturday, I decided to spend the afternoon at the Charleston Museum.  They have the oldest museum in the US.  The citizens started the museum in the 1730’s.  They wanted to preserve the culture of Europe in this new civilization.  After the museum, I took the trolly to church at 5:30 and got caught in a downpour after church.  The church bulletin didn’t quite make it to the trolly stop as an umbrella.  There was a beautiful rainbow over the harbor when I returned to the boat.

Dave’s day was spent working on the water system again.  We have 2 water tanks.  We noticed when we switched to the aft tank, the pump worked much better.  So Dave decided to put in a shut off valve for the water maker system, which is connected to our forward water tank.  Now the pump is working great again.  We have a new water pump, but our Marathon friend recommended rebuilding the pump.  So Dave still plans to do that when we are going to be somewhere where he can have a kit sent to us.

Dave also put a 12 volt outlet in the cockpit.  Now we are able to charge our phones, or use our mini iPad for navigation or listen to books.  Such a handy guy :)

A new boat neighbor invited us to go an Irish Pub Saturday night.  Little did he know that our son plays in an Irish Band.  We were able to walk about 10 blocks to Tommy Condon’s.  The lead guy has been playing there for many years.  Tonight they had 4 people.  He played the bodhran-Irish drum, there were 2 guitar players and his son played an electric type of violin.  He was amazing!  Besides Irish songs, they would go into Pink Floyd, Neil Young, John Denver, Johny Cash-real crowd pleasers.  Our friend, Gary, is from Tennessee.  At the table next to us were 2 people from Sioux Falls, SD.  But when they played Dixie, the majority of the place was obviously from the south.  Talk about ‘southern pride”.  It was cool to experience.  Of course our friend loved it when they played Rocky Top Tennessee.  We South Dakotans were feeling left out.  Only song I could think of for SD was Home on the Range.  Fun night, but we’re getting too old to close the bar.  And it seemed like the band got louder as the crowd got rowdier.

When we got back to the boats, we told Gary to check with us when he was going to brunch with Bloody Mary’s in the morning.  That was the beer talking. 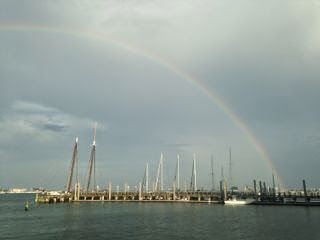 Posted by svluckofafool at 9:41 AM