Our flight wasn’t until 10:00am.  So we were able to have a cup of coffee with Jerry and Barb and visit a bit before leaving.  Since we were returning a car, we thought we’d get to the airport with plenty of time for the unexpected things to happen.  But traffic was fine.  That left us time for a nice breakfast at Ike’s in the airport.

We switched planes in Chicago and Miami.  We landed in Key West just in time for our friends, Brian, Jackie and Devyn Killion to pick us up.  They live in Cape Coral, Fl, which is where our storage unit is located.  So they brought our 2 Dahon collapsable bicycles with them.  We had stored them earlier while Dave was doing so much work on the boat because they would have been  in the way.  But there have been times that they would have been handy to have.

We went to Schooners for dinner.  It is an outdoor restaurant on Key West Bight, the harbor near the Old Towne part of Key West.  They  have about 6 tables on an second floor deck.  We decided that was as good a place as any to see the sunset.  It was a little late to make it to Mallory Square.

After dinner, we walked to Duvall Street.  Jackie and Devyn have never been to Key West.  We went down to Captain Tony’s (to get out of the heat-J Buffett line).  Devyn was immediately carded and had to leave.  So now we are telling everyone that she was kicked out of Captain Tony’s.  She is only 15.

We walked as far as Margaritaville, shopped a little and headed back to the car.  Then we had to drive about 45 miles back to Marathon.  We reached the boat after 11:00pm, made beds and hit the pillows.  We were all tired. 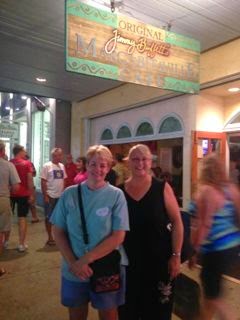 Posted by svluckofafool at 6:34 AM