After listening to the Cruiser’s Net and having breakfast, we rented bicycles for the day from Wheels-2-Go.  They deliver and pick up bikes for 24 hour rental.  Cruisers were $10 and Hybrids were $15.  We figured we would just be on flat sidewalks or roads, so we chose the cruisers.  They delivered them about 11:30am.  They came with locks and a basket, which was optional.  We took the baskets to hold our water bottles.  After many years of mountain biking in the Black Hills of SD, it was strange to be on a basic bike.  I don’t remember the last time I had to pedal in reverse for the breaks.  And there was a  nice cushy seat!  When we would meet other hard core bikers, Dave would shout out “I have a basket!”

We rode the bikes to the west end of the island and took the old railroad bridge that goes to Pigeon Key.  It is now a pedestrian and fishing bridge.  The whole  trip was about 5 or 6 miles one way.  I’m not sure if there is a bike lane on the full 7 mile bridge.  But that would be a beautiful ride.

From the bridge, we could see all kinds of sea life.  The water is pretty shallow in this area.  And the bridge was probably 20 feet off the water.  We saw a couple 6 foot sharks and one that had to be over 12 feet.  We saw one turtle whose shell looked about 6 feet in length.  We saw schools of tarpon hanging out under the bridge.  They had to be 8-10 feet long.  And we saw a school of 12 spotted eagle rays that had about a 6 foot wing span and one sting ray about 4 feet wide.

At Pigeon Key, there is a museum and several building remaining that were part of the camp used when building the bridge in the early 1900’s.  It’s an amazing story about Henry Flagler and how he is responsible for the development of most of Florida.  I had read a book about building the highway and about Flagler, so I wanted to check this out.  We took a tour with a guide around the island, then toured the museum and watched a video about Flagler and building the railroad.  A hurricane destroyed it in 1938.  It later became a highway.  And eventually, they built the new bridge over the 7 mile stretch.  But many of the other bridges are still in use.

We returned to the main islands of Marathon and had lunch in a Cuban cafe.  Pete had Cuban sandwiches on his wish list.  Then we rode to the Key Fisheries for their Wednesday special of 50 cent oysters on the half shell.  Another thing on Pete’s list.  We went back to the boat, hung out for awhile, then went back to Key Fisheries with the bikes.  We wanted to watch the sunset from there and have more cheap oysters.  They had run out of them by now, so we were glad we stopped earlier.  But we had conch fritters (on the food list) and Dave loves  their rare tuna steak sandwich.  The guys shared that and one of their konchworst. I had a conch salad which was similar to ceviche.  It was fun to sample and share.

We rode around the park for a while with the bikes.  It was after sunset, so we stayed off the main road.  We returned to the boat for more cards between me and Peter.  Fun day! 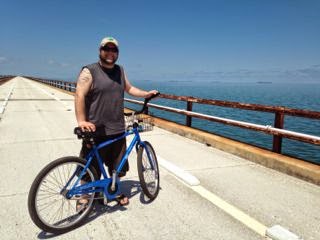 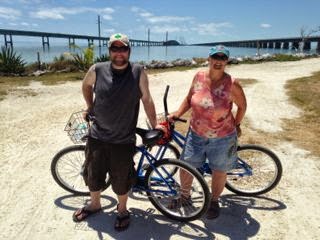 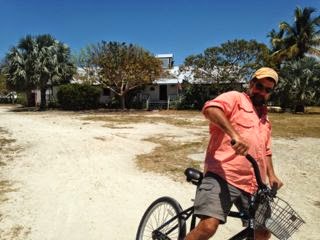 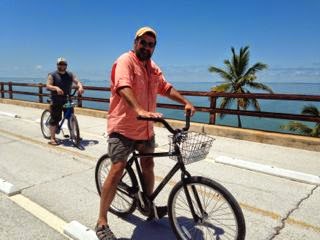 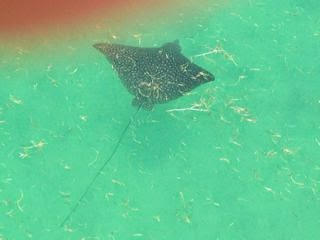 tried to zoom in to get one of the spotted eagle rays from the bridge.  also got my thumb because I was afraid of dropping my phone 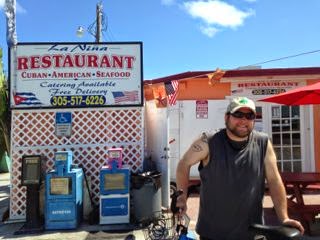 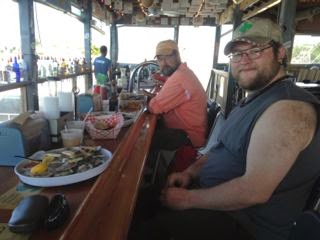 Posted by svluckofafool at 12:43 PM