My niece, Sherri Zeller and her husband Bobby Hanson, of Denver, CO were in the Key Largo area for a long weekend vacation.  So we connected ahead of time to figure out how we could get together.

They arrived at our marina about 8:00am.  I gave them a tour of the facilities before taking them back to our boat by dinghy.  Dave and Pete made breakfast for us, a frittata.  We enjoyed the frittata, bagels, tangerines and coffee in the cockpit.  We were able to visit for a couple hours before taking photos and taking them back to the marina.  What a nice surprise visit.

The rest of the day was lazy.  Dave walked to West Marine to return some items.  He picked up Cuban sandwiches and beer on the way back.  Have to make the most out of our trips to shore.  Pete played guitar, and we all took turns taking naps.

About 4:30, our Lithuanian friend, Thomas, stopped by inviting us for shish kabobs, but his grill wasn’t working properly.  So actually, he wanted to cook on our grill.  We told him how we were planning to go to the potluck and jam session.  So we invited him to cook them here and then go to the marina with us.  He couldn’t convince his wife to join us, but he took us up on the offer.

So he came back between 5 & 5:30.  Dave helped him grill while Pete made roasted potatoes for our potluck.  I helped out where ever needed.  One thing was mixing drinks.  Thomas brought his favorite Polish vodka.  We only had tonic to mix it with, but that worked fine.

Our potatoes took longer than we hoped, so we ate his shish kabobs here before we went.  They were great.  They were pieces of pork, green pepper and onion marinated in mayonnaise.

Then we packed up everything for the party.  People were still arriving and eating, so we weren’t too late.  About 7:00, the guy who brought the sound system sang for awhile.  Then another gentleman sang.  They both said they needed to play while there was still daylight so they could see their music.  Pete then played from about 8-9:00.  Then a few others played for about 30 minutes.  Then the sound system had to shut down because of the boats in the area.  But we stayed for a couple more hours with Pete and some others taking turns playing.

It’s always fun to visit with the other sailors, too.  We met a guy who just returned to the US after sailing from California, to the south Pacific to south east Asia to south Africa and back here over the last 17 years.  Really gets the wheels turning about the endless opportunities we have. 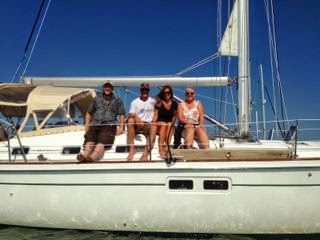 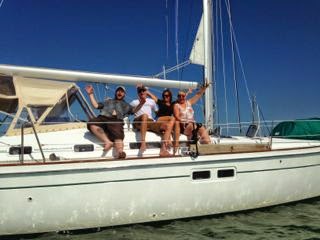 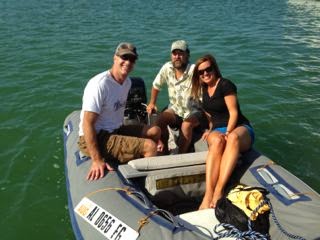 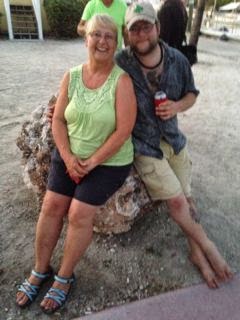 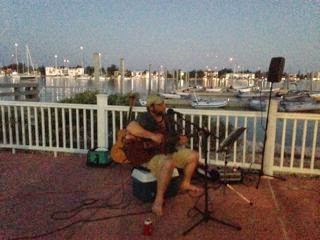 Posted by svluckofafool at 1:34 PM