After listening to the cruiser’s net again, Dave made us an awesome breakfast omelette with leftover meat and cheese from the crossing.  Our boat was scheduled for a pump out for our heads.  We didn’t have to be here, but we couldn’t take the boat anywhere either.   So we just sat in the cockpit talking until about noon.

We had asked at the marina about places to snorkel.  There was a reef about 3.5 miles south of us that was popular.  So once we were free to leave, we headed snorkeling.  We sailed the boat to the reef.  We actually turned the engine off and sailed for the first time since Dean was with us.  The dive site was marked with a lighted tower.  Dave read that there has been a tower at this site to mark the shallow reef since before the Civil War.  There were several mooring balls to tie your boat to near the reef.  That way you don’t damage the reef by dropping an anchor.

We swam right from our boat to the reef.  Right away, we noticed jelly fish about 2-4 inches in diameter all around us.  Nobody noticed anything stinging us, so we just ignored them.  They were all over the place the whole time we were in the water

We saw a large variety of fish at this reef, comparable to what we see in Cozumel.  There were several Tarpon in the area.  Dean saw 2 large stingrays.  And on the way back to the boat, Dave and I got to see one, too.  We never did get to the shallowest part of the reef.  There was enough surge (wave action below the water) that we didn’t want to go any more shallow.  You worry about getting pushed up against the coral.  After about 90 minutes, we headed back to the boat.

We have a wash down hose on the swim deck.  And since the motor had been running to get us into position for the mooring ball, the water had been heated.  So we hosed off our gear and rinsed the salt off of ourselves.  It’s now at least 4:00pm.  I made us a quick snack of cheese and crackers and cucumbers.  We didn’t have lunch and were all hungry.

After getting back to our mooring ball in the marina, I took a quick shower on the boat.  Then we out to eat, AGAIN.  This was Dean’s last night and he wanted to go back to the fish market.  Dave had his tuna sandwich again-huge tuna steak, Dean had a lobster roll, and I had key lime scallops over linguini in a wine sauce.  We also shared a Konchwurst just to see what it was like.  It was a wurst made with conch.  And they served it like an Italian sausage with sliced peppers and onions in a light tomato sauce.  Wouldn’t recommend it.

We came back to the marina and the guys showered there.  I used the wifi from outside of the marina (if you sit by the east wall).  But I also had a nice chat with my sister, Janice.

We returned to the boat so Dean could pack.  We also sat in the cockpit and visited with a nice breeze.  There was a lunar eclipse at 3:00am, so I set my alarm to get up and check it out.  There was no way I would be able to stay up until then.  Another sign of age. 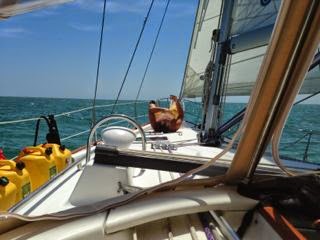 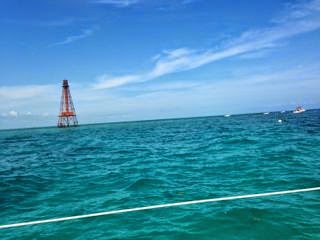 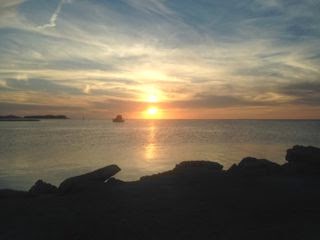 Sunset on the Gulf side of the island at Key Fisheries

Posted by svluckofafool at 1:11 PM