We were  up around 8:00 with no alarms.  Didn’t catch any crabs in our crab cage.  We had quick simple breakfasts and were able to leave our anchorage at 9:00am.  High tide would give us the best chance of getting out of this channel without hitting bottom.  Dave brought up the anchor and I was at the helm.  Once the anchor was up, we let the current drift us backwards, away from shore.  Then we could look at our chart and follow the same route back out, the way we came in.  But for some reason, the chart was showing our route in a different location.  So you always need to be aware of the channel markers (red and green) and stay between them accordingly.  Today, red would be on our left, because we were leaving a channel and heading to sea.  When you are returning to an inland port, you go by Red Right Returning.

Once we were back out in Hawk’s Channel, that follows the shoreline along the Keys, we headed east again towards Marathon, Florida.  The seas weren’t as rough today.  Winds were 10-15 knots and swells were 2-4 foot.  We decided to take one hour watches.  Is not as important to take watches if you are only making a passage in the daytime.  But none of us slept very well last night.  I think we may have overdone the spicy dinner last night.  We all had crazy dreams.  And besides, if we don’t take watches, Dave will be at the helm the whole time.

We could see the Seven Mile Bridge on the overseas highway starting about 1:30-2:00pm.  Marathon is at the east end of the bridge.  We have driven over that bridge several times.  So it was pretty cool to see it from the water.   Once we were vacationing in the Florida Keys while our son, Peter, was in the Merchant Marines.  He was on a freighter ship passing the Keys and could see the 7 Mile Bridge.  We hadn’t seen him in a loooong time, like over a year.  So it was so strange to be so close and not be able to actually see each other.

When I was in Marathon in February with my sister, Bev, we stopped at the City Marina and were given some great information to know the marina before we entered it.  We entered the channel to the Boot Key Harbor about 3:30.  There is an old bascule bridge that is now open permanently between the opening of the channel and the marina.  We were told to call into the marina once you reach that bridge.  Dave was at the helm, so I called in on the VHF radio.  This is a huge marina.  There are over 200 mooring balls (Ft Myers had 75), about 20 places at the dock, and LOTS of boats anchored.

So on the VHF, Ann directed us to follow channel markers into the “streets” between the mooring balls.  Then she asked us to call again.  The second time she directed us to the actual mooring ball.  They are designated by alphabetical rows and the balls are numbered.

Once we were at our mooring ball, D8, Dave and Dean cleaned the bottom of our dinghy that was on our deck.   I did a quick cleaning of the heads, not as detailed as I usually do on a weekly basis.  Since they were washing the dinghy on the deck, we couldn’t open any windows yet.  And it was in the low 80’s.  So I didn’t want to stay below the deck too long, or I think I would have passed out.  We had to mount the motor back onto the dinghy.  Then Dave and I went to shore to check in before they closed at 5:45.

We figured we’d stay here until Dean leaves on Tuesday.  That is 5 nights at the marina.  Paying for a week gives you a discount.  Here if you pay for 5 nights the next 2 are free.  So we paid the weekly rate.  They give us keys to the showers that are available 24 hours.  There are 7 rooms.  Each one in as individual room with shower, sink and toilet.  I have a cheap pair of flip flops that I wear in the marina showers.  Just feels better.  We decided to all shower.

After cleaning up, we walked to the closest restaurant.  The Florida Keys Steak and Lobster was right across the highway.  We each had an excellent dinner.  Then we called it a night. 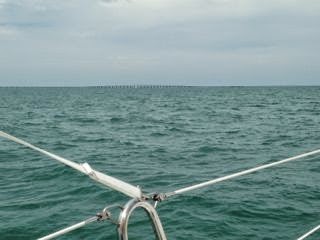 Seven Mile Bridge-longest segmented bridge in the world. Picture doesn't do it justice. 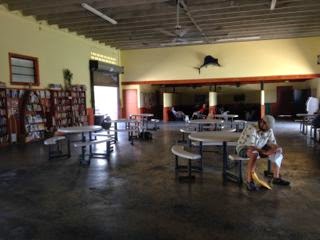 Common room in Marathon Marina.Wall on right side has picnic tables, power connections, and wifi for the computer geeks.  Rooms in the back have TVs. 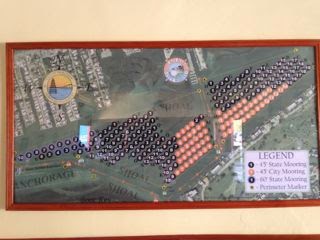 Map of the mooring field. Had to enter along the south to follow a channel deep enough for our boat.
Posted by svluckofafool at 12:54 PM