Before leaving the slip, Dave moved our dinghy onto the deck.  We will probably back into our slip, so the dinghy could be in the way if it’s on the davits.  Raising the anchor took longer than usual.  The chain seemed to have laid across itself several times.

On Saturday, I called the Conch Harbor Marina to make a reservation for Monday and Tuesday night.  I believe there are 4 marinas in Key West Bight which is right in the Old Town section of Key West.  The cheapest is the city marina.  It sounded like you had homeless people hanging around your showers trying to get inside to use them.  So we chose a private marina.  It is spendy, but much less than a room in Key West.  I believe they said it was $3.86 per foot.  So that will be about $166 per night.  I don’t think we have paid more than $2.00 per foot so far.  That included free electricity (some marinas charge that separate), water, and pump out at our slip.  Their shower facility was very clean and roomy.  Their laundromat is FREE.  That is unheard of.

We also had access to the swimming pool at the end of our dock, Dante’s.  There are two outdoor bars and 2 restaurants.  Plus you are walking distance to unlimited restaurants, bars and shopping.  The funny thing was that the  Ft Myers to Key West shuttle docked next to this marina.  We saw that boat leave and return to Ft Myers for 3 months.  And here we are next to it in Key West.

Every time we have been to Key West since we started sailing, we have said that we wanted to sail in here someday and stay in Key West Bight (this bay).  So it was pretty cool to sail in here today at about 1:00.  It’s always a little nerve racking to pull into a new marina.  And the wind was about 15 knots.  We were able to pull up the the fuel dock easily.  Then we scoped out where our slip would be, which side we would tie to the dock, and how much room we would have to take the stern into the slip first.

Dave brought her in like a pro, with the help of me, Dean, and Jimmy, their dock hand.  We had a lazy day checking out the facilities.  Dave did a few odd jobs.  Then we went to the Turtle Kraal for dinner, just 2 restaurants down the dock from our marina.  Excellent meals.  Then we went to Schooner’s Wharf Bar a little further down the dock.   This is a great outdoors bar with live music.  We usually make it here every time we are in Key West.  There were 2 guys singing, playing steel drums and guitars.  When we arrived, they were singing a spoof on Margaritaville called Minnesotaville.  They were using accents and talked about snow, mosquitoes, hunting, and fishing, eating hot dish, etc.  It was great.  They played some fun music.  One of the guys was from North Dakota.  We had a few beers and even danced on a rocky, uneven floor.  Sure was nice to be able to just walk down the dock to our boat to go home. 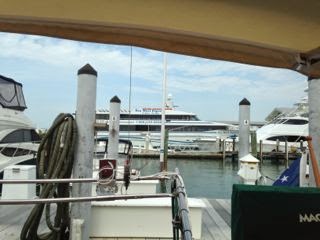 Ft Myers to Key West Ferry from our cockpit 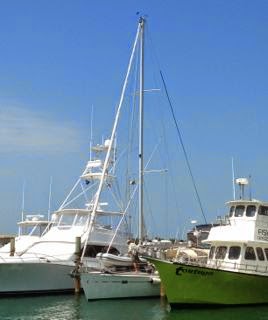 Posted by svluckofafool at 12:33 PM