Well, if you have been waiting for an adventure, we finally have another one to share.

Our week slip rental at Burnt Store Marina was up today.  We were ready to move on.  Our SD friends were leaving the Ft Myers area and heading north along the ICW to Useppa Island.   This is a private island, but because their charter company had connections with this island, they were able to dock there and we could too, as their guests.  When we found out it would be $2.50 a foot for the night, we decided we would just anchor in that area and join them by dinghy.  We had already looked at anchorages in that area near Cabbage Key.

The  morning was foggy, so we spent the morning connecting with the bimini company out of Tampa that we have decided to use.  We had to send them photos and measurements.  Then we readied the boat for leaving the dock, took advantage of using the showers at the marina, went to the fuel dock to use the pump out for our heads.

By the time we left the marina it was 2:30.  We knew it wouldn't take us as long to get to the meeting point, so we weren't in any hurry.  BUT, by now the winds were getting a little stronger.  As we left, someone said it was gusting to 25 mph.  We were OK with that and just kept going.  When we got out into Charlotte Harbor, we set a waypoint to head east across the bay before we would head south down the ICW.  The wind was from the north, so we started rocking and rolling right away.  It reminded us of our passage from Panama City to Clearwater Beach.  But it was daylight and we were enjoying the ride.  No sea sickness!  When the waves starting splashing over the side of the boat occasionally, we decided to get our foul weather coats.  We had the engine running at 2000 rpms.  Usually we get 6 knots, but the wind was holding us to 2-3 knots.  About 3:30-4:00, our  friends called and said they decided not to go that far north against that north wind and were stopping at Captiva Island.  We were OK with that, since we weren't going to stay at the marina with them that night anyway.  We just followed our plan.

About 2/3rds of the way across Charlotte Harbor, we angled SW.  This helped us pick up speed to  4-5 knots.  But it also brought more spray from the waves over the boat.  Dave was in shorts and had gotten pretty wet.  So I went below to get the foul weather pants and gloves and hats.  The temperature was around 70, so it was more for protection than warmth.  But Dave had gotten a chill from being wet.

At 4:30, we were still on the bay and about a half hour away from ICW, which runs between the islands.  We both felt the wind pick up.  We were having 30mph gusts.  We were both still giggling and enjoying the ride knowing we'd be in the ICW soon.  We noticed part of our bimini tearing, which is why we are planning to replace it.

At 5:30 we entered the ICW and turned south.  Now we had the wind pushing us and were getting 6 knots.  It didn't take us long to get to the channel between Useppa Island and Cabbage Key where we had looked at anchorages on the charts.   There were 2 areas recommended by Active Captain.  When we came to the first one, it didn't seem very well protected from the north wind, so we went a little further.  The second one wasn't much better.  If we went further down the ICW, it would get dark before we would reach another anchorage.  So we turned around and went back to the first anchorage.  We thought if we got off the ICW and closer to land, maybe we would be more protected from the wind.  As we approached the area, it looked smaller in real life than it did on the charts.   We were motoring east off the channel in 7.5 feet of water and all of a sudden came to a dead stop.  We hit bottom and weren't moving.  We have a bulb keel.  It comes down from the hull as a fin then widens into a torpedo shape.  We felt we were on a sandbar because our rudder was free and the bow depth was reading 12 feet.  So Dave started moving the boat backwards and forwards while turning the boat to make a wider path.  It reminded us of trying to get out of a snow drift.  While he was doing this, I was checking my Active Captain app to see if there was a marina at Cabbage Key, and yes there was.  If we couldn't get off of this sandbar, we would set a couple good anchors and call BoatUS to tow us off tomorrow.  We finally started  moving off the bar and back towards the ICW.  So I quickly called Cabbage Key, and yes they had a slip available and someone would meet us at the dock to direct us to a slip and help tie us up.

As we entered the small marina, there were 3 people waiting to help.  In larger marinas, these are usually young strong guys that also run the fuel docks.  Well there was a man and woman around our age and a younger woman probably in her 20's.  I think their main duty was restaurant staff, not dock hands.  We motored up to the dock with the wind trying to push us away from the dock.  I threw them a line from the bow, but they didn't have cleats to tie to.  So I told them to wrap it around a piling, which the woman did, but she tried to hold it and not tie it.  Dave was trying to get a stern line to the dock, but she couldn't hold the bow and we started swinging away.  She had to let go, and we backed away and tried again.

This time the guy gets the line and wraps it around the piling, but there was probably about 15 feet of line out.  Dave got the stern line to the young woman and she got it around the piling right away and held the stern closer to the dock.  In the meantime, I got another line attached at midship and threw that to the dock.  It got wrapped around a piling with about 8 feet between the boat and dock.   We were trying to motor and swing the boat to the dock, but it was difficult to shorten the lines because of the way they were wrapped around the pilings.  The younger woman even fell in the water, but hung onto the line and was right out again.  I think she only got wet up to her knees.  They were all such troupers.

By now it was almost sunset.  We thanked them and sent them all inside.  Before they left, the young woman asked if she could start some coffee or hot chocolate for us.  I said I was thinking more of a beer.  We finished securing the boat, changed into dry clothes,  and went up to the lovely Cabbage Key Inn and Restaurant to pay for out slip and have dinner.

We had been hearing about this place from several different people.  The island can only be accessed by boat.  There are no roads, only nature trails.  The Inn has 6 rooms and they  have several cottages on the island.   We came into a cozy bar with a gas fireplace burning.  The place was built in the 1930's and reminded me of the old Latchstring Inn in Spearfish Canyon in SD.  The walls were totally covered in dollar bills with names written on them.

Dave had hot chocolate with  cinnamon whiskey and I had a beer.  We decided to have dinner and tip everyone generously.  We had heard that this was where Jimmy Buffett wrote Cheeseburger in Paradise.  There was an autographed picture of him on the wall, so I had to ask.  The bartender/dock hand, Mark said that Jimmy used to come to Cabbage Key by boat years ago and would play guitar out on the deck.  Then at one of his concerts, he invited the owners of the Inn as guests, and he dedicated Cheeseburger in Paradise to them.  They Inn doesn't advertise anything related to that, but that's the word around these parts.  So Dave had to have the cheeseburger and he said it was great.  I figured I would try it tomorrow, if we stayed, so I had the grouper special.  You could have it fried, grilled, bronzed or blackened.  I had never heard of bronzed, so I had to try it.  It is a lighter version of blackened and was very good.  The grouper was really moist.  Gotta love fresh catch.

There was  one other couple there when we arrived.  Mike and Nancy were from Sarasota.  They drove to Pine Island and brought a little boat over to the island.  They were about our age, retired and traveling a lot.  Another couple came in a little later, Liz and Sean.  They were probably in their thirties. They arrived at Cabbage Key by ferry.  They had also traveled extensively, so there were some interesting conversations.  For example, 4 out of 6 had been to Egypt.  Sean was from MN and we had been to a lot of similar places.  He just kept shaking his head and couldn't believe the connections we had.  After few whiskey/hot chocolates, Dave threw out a couple Ole and Lena jokes with his strong accent.  The Florida couple had never heard them before.

The BCS National College Football championship game between Florida State and Auburn, Alabama was going to be on TV at 8:30, so we all decided to stay and watch the game.  The bar closed at 9:00, but they let us stay.  They showed us where to turn off the lights and the TV, sold us what drinks we wanted, actually gave me a bucket of beers on ice.  The others had drinks in their rooms that they just brought in after the bar closed.

So about midnight, we hung on to each other as we walked back down the windy dock to our boat.  We hooked up our shore power, turned on our little electric heater, and climbed under our comforter.  The wind howled all night, but reminded us of blizzards back in SD.  As they say in SD little town newspapers "and a good time was had by all". 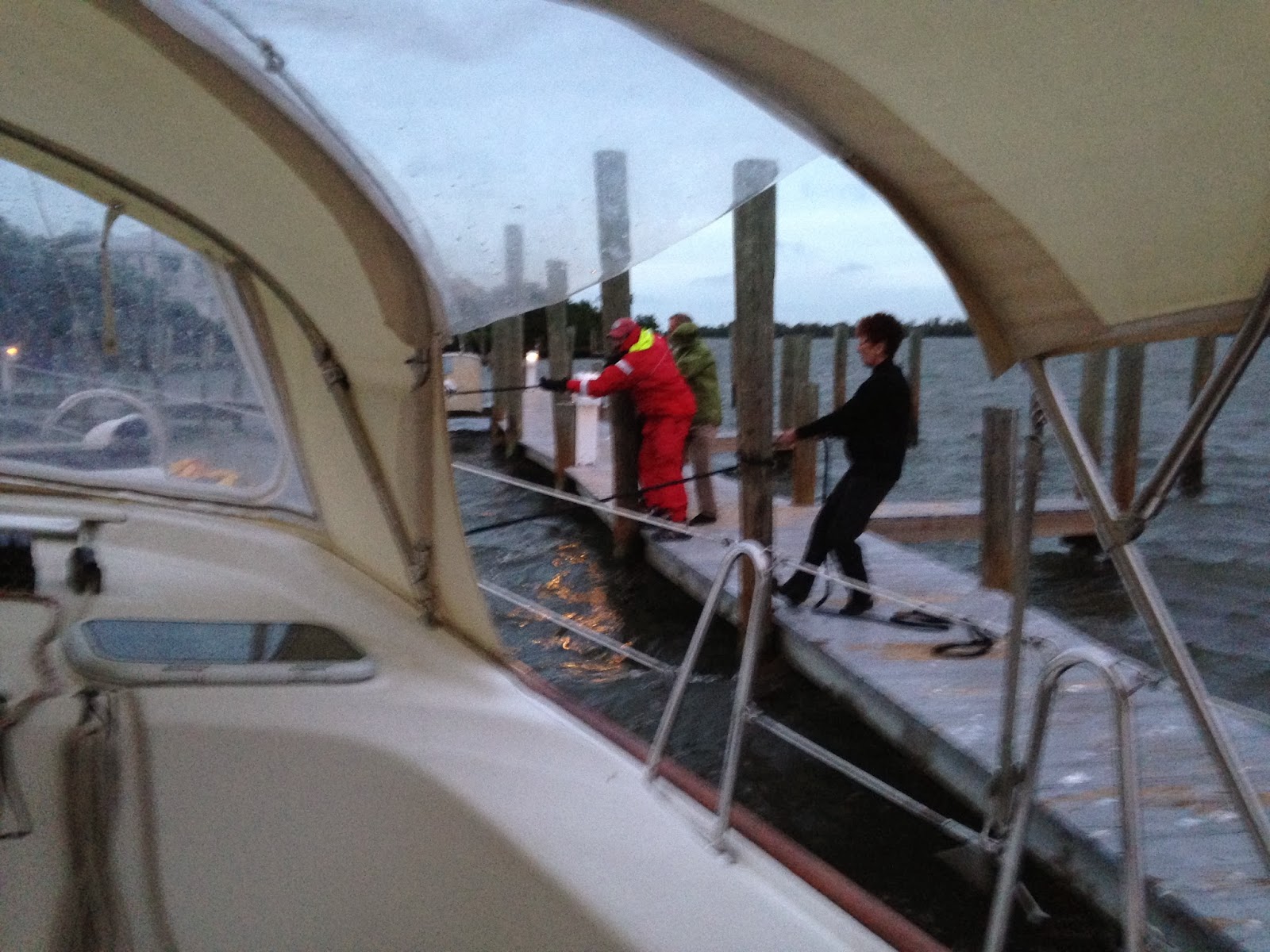 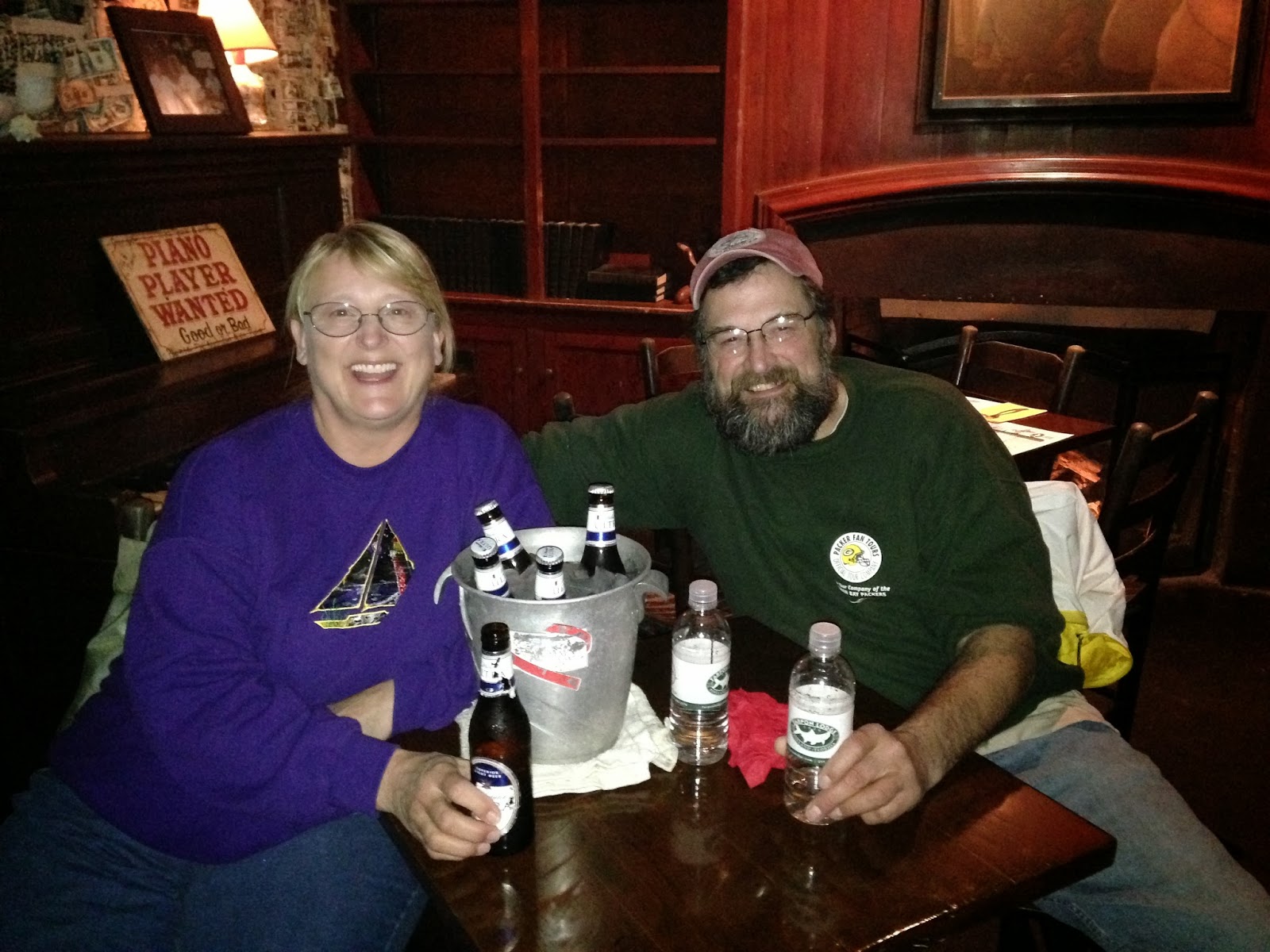