Well, we are having a slow start to the new year.  I came down with a cold/flu Wednesday night.  I don't know how Dave has avoided it.  Stay tuned, he's bound to get it.

We listened to the Sugar Bowl football game between Alabama and OU last night.  Dave and our niece, Melanie in OK, were harassing each other through texts.  Since we're in EST, half time was at 10:30 and I had to give it up.  It wasn't over until about 1:00am.  And OU won.  Dave went outside to check our lines and found that the tide had risen quite a bit.  He had to sit down on the edge of the boat to reach the dock.  He had to add a fender (bumper) up higher on a piling. 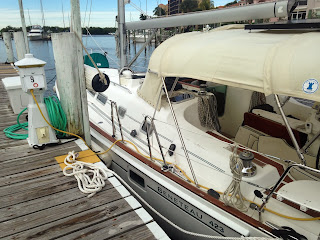 The piling is the post next to the green hose.  There is one fender laying horizontally along side the boat.  But he had to add the one that is higher up on the post (white with a black end) because the boat was that high.  He had to adjust lines, too.  I don't think it normally changes that much, but there was a west wind blowing water into this bay.  Usually there is a 2 foot tide.  This was closer to 4 feet.

I have mostly slept for 2 days, but I did get some laundry done today.  It was only 55 here and everyone was complaining about the cold.  Dave keep tinkering on odd jobs for the boat.

Dave went to the restaurant tonight for an all you can eat fish fry.  I was content with leftovers.  The waitress brought him vinegar for his fries thinking he was Canadian.  I don't think the people here have strong southern accents, but they can sure pick out our northern accent.  I guess one year in Alabama didn't change us much.
Posted by svluckofafool at 5:08 PM