Today we have a reservation with the City of Ft Myers Beach Harbor Master to have our heads pumped out.  All they told us was that it would be early Monday morning.  About 11:00, we called the office and they said Booba would be there soon.  We're not sure how he spells it, but most people here are called Bubba for a nick name.  This was pronounced Boo-ba and Dave even asked him to be sure.   He had a modified deck boat and came up alongside our boat.  His hose came over to our boat and sucked out the head.  Pretty slick.  It's free so it encourages people to use it instead of pumping overboard, which is illegal, but I'm sure some people do it.  He had holding tanks on his boat for the poo he collects.  We were in the San Juan Islands with friends.  There was a company that came to our boat to clean our head.  They were called the Fecal Freaks.  And their slogan was "We take shit from anybody".

A few days ago, while I was brushing my teeth, I realized that I hadn't cleaned the inside of our medicine cabinet.  The only time I remember doing that in my home was when I would move.  But I decided I would do that periodically on the boat.  Today, when I opened the medicine cabinet in the sunlight, I could see black speckles all over the inside walls.  Yep, MILDEW.  There is always a damp feeling on the boat.  We expected that when we were used to 10% humidity and generally have 85%.  So now that has me thinking about what else we need to be cleaning.

Our bathroom interiors are white fiberglass.  When you see the boats with lots of woodwork, it always looks so cozy and more like a traditional boat.  But I like the fact that I can hose it down if I want to.  There is a floor drain in each head.  AND, would you even see the mildew on that woodwork?

This afternoon, Dave did some exploring of the area with the dinghy and found a great marine parts store right on the water.  He says "good enough" store.  Then we loaded up garbage, laundry and shower bitch bag and headed in together.  Once we had our showers and transferred the laundry to the dryer, it was 5:00 and we both decided we were hungry.  We walked to a nearby bar for chicken wings and beer.  Can't complain about laundry day.

Tonight we ran our generator for an hour to charge everything and use the wifi.  We need to turn on our wifi booster to pick up the wifi from  shore.  We can always get wifi from our phones, but I don't like to type my blog from that keyboard.  And I don't open photos or documents on my phone or watch facebook videos.  Uses too much of my data package.  It's a juggling game that will become second nature with time.
Laundry break. 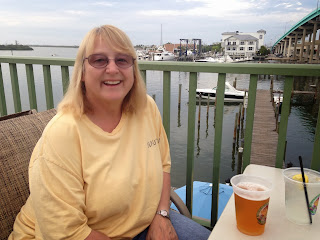 Booba and Dave cleaning out one of the heads.  The yellow cans hold extra diesel fuel. 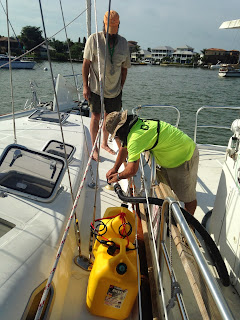 There are several shrimp boats in this area.  We haven't checked into buying it as it comes off the boat.  But there is a building that says Shrimp Market on it. 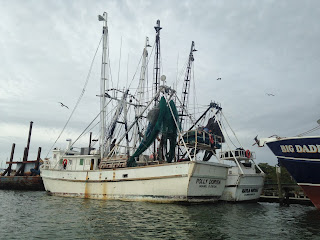