Going to church this morning was a 4  hour commitment.  The mass was still one hour, but getting there and home took 4 hours.  First I had to see which trolley would get me there on time, even if it was running late.  Then I had to figure the time it would take to dinghy to shore and walk to the trolley stop.  Then I had to wait about 45 minutes after church for the next trolley, let alone get back to the boat.  But it was a lovely morning and a beautiful mass, church and property.

People are very friendly and help you figure out what stop you need.  There was even a couple riding the trolley going to the same church.  They told me I could follow them.  Shortly after I boarded the trolley, we stopped for someone waiting at a stop.  This burly looking guy about 60 yrs old told the driver he just wanted to buy an all day pass, and he didn't want it activated.  She told him he would have to go to Publix supermarket to buy one.  She would have to activate the ticket if she sold him one.  Then he told her that  he was going to jail and they would be taking all of his money.  So he wanted to buy the ticket while he still had some money.  She still couldn't do it for him.  He said he couldn't leave and go to Publix because the police would be picking him up soon for trespassing.  So here I am on one hand thinking "this poor guy, I wish I could give him the money for the ticket, but they'll just take that away, too."  and on the other hand thinking "OK, we're done here, let's get going or I'll be late for church".  I'm surprised I wasn't struck down on site.

After I returned home, we had great left over ribs from last night.  Using the microwave to heat them really draws on the batteries.  I found myself wondering "how would my mom have heated these up before she had a microwave?'.  Microwaves just became part of our lives.  After she passed away, my dad needed a pacemaker.  There used to be concerns about using a microwave if you had a pacemaker.  Dad just said that he'd probably starve to death if he couldn't use the microwave, so he was going to take his chances.  I don't think he had cooked a meal in his life until she passed away.  He must have been 76 or 77 and lived until he was 91.   So we are going to start watching what we are using the microwave for.  And if it dies, we will consider if we really want to replace it.  We are both thinking it would be a great storage area.  Funny how your priorities change.  I might miss my microwave popcorn.

Since we needed to take the trolley to Publix today, we decided to ride the whole loop just to see what else was in the area.   We noticed a marine electronics store just across the bridge in Ft Myers that piqued Dave's interest.  We saw some fun restaurants and found a dentist within walking distance.  (We both need to have our teeth cleaned.  We haven't PAID for that in about 30 years.)

I had put together a shopping list.  But this was the first time we had to look at the cart and put things back because we would have to carry everything on the bus and to our dinghy and then in the dinghy back to the boat.  Whole new concept.  We had brought a thermal bag, another nylon bag, and my hard case for eggs.  Outside the store, we repacked everything and even got rid of the egg carton and some  boxes.  We even estimated the time the trolley would be back and were really hustling outside the store to catch the trolley and not have to wait another hour.  I think Dave had had enough of the civilized world.  Sailing really suits him.  Plus we wanted to listen to the Broncos football game back at the boat.

Back at the boat, I unpacked and organized groceries while Dave cooked jerk chicken and used my "thermos beans" to make beans and  rice.  I had used cranberry beans, just because I had never heard of them.  They were like a mild red bean.  And the Broncos won!!
Below is a picture of the walkway up to the church. 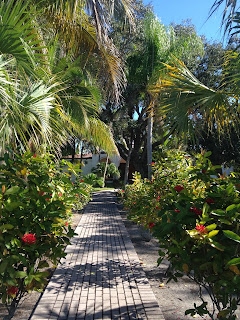 This is the dinghy dock.  They are much lower than a regular boat dock so you can get into and out of your dinghy easier.  Ours is on the left with the yellow life jacket in it and the grey chaps covering the sides for protection.  Most places you can just leave them and not worry about them.  But if you see other people locking their dinghy, or if you're not sure, it doesn't hurt to lock it to the dock.  The motor is locked onto the dinghy. 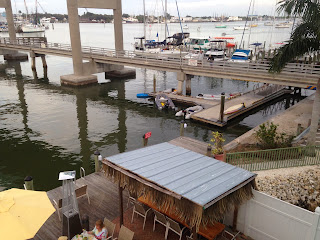 Posted by svluckofafool at 4:28 PM