Finally we made it to the Cape Coral/Ft Myers area.  We had hoped to be here by Thanksgiving!  That's life upon a boat!  It's been really hard to try to make future plans to meet with friends this winter.  All I can say is they better have alternate plans.

We traveled down the ICW again today.  There were some areas that the channel was pretty narrow and would get dangerously shallow if you didn't follow it closely.  (Seems like I have mentioned that before, but it was the worst today.)  We had to go  under a couple bascule bridges today.  I like that word-bascule.  It's a French term for balance scale.  The common term is drawbridge.  It uses a counterweight to balance the movable section.

We also went through another swing bridge.  I was riding out on the front deck during that one.  It was a beautiful sunny day.  At one point we had to slow down for a small car ferry to cross the channel in front of us.  There was one from each side.  It took us a few minutes to figure out what was blocking the channel in front of us.  We checked our great Garmin Bluechart Moblie app on our phone and sure enough, it was marked on the chart.

Once we reached Charlotte Harbor, we crossed the bay to the east to Burnt Store Marina.  We have had friends use this marina before.  We drove into the marina early November to check it out.  The marina is part of a huge retirement community.  There is every kind of accommodation, golf courses, pools, restaurant, convenience store/snack shop.  Feels like we've been camping for a week and just arrived at a resort.

After securing the boat in a slip, we headed for the bar!!  Dave even joined me in a few beers, which he rarely does anymore.  They had never heard of a cowboy martini-olives in your beer.  Our waiter even asked if we were from Canada because of our northern accents.

We plan to stay in this marina for about a week.  Then we have SD friends coming to the area to charter a sailboat for a week.  We plan to follow them around the area and have some fun exploring.
Our boat is on the end of the dock on the left side of the photo. 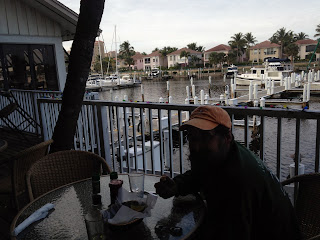