Today we slept in, then motored to the Clearwater Beach Marina to refuel.  We left our anchorage at 11:00 am.  By the time we made it to the marina, refueled, and pumped out our heads, it was 1:30.  When you pump out a head,  the marina has a big vacuum hose that you take to an opening on the deck of your boat.  These hoses are always nasty to handle.  You try to keep the nozzle pointed up so nothing dribbles out of them.  You put the nozzle into your tank opening and flip a lever to start the vacuum.  When Dave started the second one on our boat, the system "burped" and some poo spattered out onto the deck and onto his jeans.  He decided next time he will just wear his foul weather gear, then I can just hose him down afterwards.  The marina let us use a slip for an hour while we went ashore for lunch.  I was finally feeling like eating again.

We stumbled into the closest restaurant, Crabby Bill's.  We ordered a hamburger and a grilled grouped sandwich then split the orders between us.  It was a real touristy place and a photographer was walking from table to table offering to take photos for the people.  For some reason, she walked right by our table.  We must not have looked too photogenic with no shower and wearing the same clothes for the third day in a row.

By the time we returned to our boat it was 3:00.  We decided to head down the ICW and find a place to anchor by the time the sun went down, about 5:45.  We had to go through 2 bascule bridges.  They were only 20 and 25 ft clearance and our mast is 54 feet.  So we had to call the bridge tender on the VHF radio and ask them to open the bridge.  They would stop traffic and lift the bridge for us.  Pretty cool. 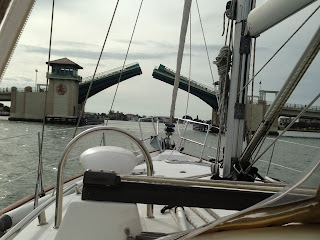 Though out the afternoon, we were hearing the Coast Guard announce on the radio that there was a small aircraft that had crash landed in Tampa Bay.  They would announce the area, but we weren't familiar enough with the bay to know exactly where it was.

We also contacted JSI, a company in St. Petersburg that could make us a new bimini and dodger.  They were recommended by Horace in Panama City.  We are going to meet with one of their employees in the morning to get an estimate from them.

We anchored just off the ICW again by Madeira Beach.  It's close to St. Petersburg.  We just had a relaxing evening with soup and hot tea on the boat.  We both felt kind of like we had hangovers today, being sleep deprived and a little dehydrated.

These boats were racing.  They look like outrigger canoes. 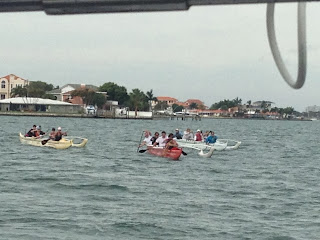 Posted by svluckofafool at 4:34 PM