Merry Christmas.  We really miss our son, Pete, and wish he were sailing with us.  We often say to each other "Pete would love this!"

We left Panama City Marina at sunrise, 6:30 am CST.  It was a nippy 34 degrees.  Thank you for the well wishes over the radio from our new friends, Ron and Libbo.  (We did hear your radio call about 9:00, but you must not have been able to hear our response. May have been our cockpit mike.) 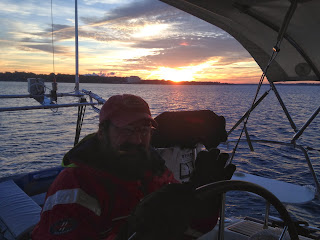 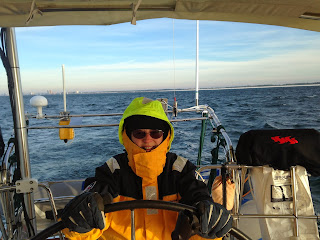 Picture above has Panama Beach in the background.

It took us about an hour to get out of St Andrew Bay and into the Gulf where we turned east heading for Port St. Joe Bay.  We were escorted out the bay by dolphins.  The plan for today was to sail to Port St. Joe, then enter the ICW to Apalachicola, spend the night, then leave via Carabelle in the morning for Clearwater, Fl.

When we were heading into Port St Joe Bay about noon, we were disappointed about leaving the open water.  We made the quick decision to head back out and angle over to Clearwater today.  The seas were fairly calm and we hated to waste a good day at sea.  We made a louie around a bouie or would that be a luoy around a buoy?  We figured it would be about 180 miles.  That would put us in to Clearwater about midnight on the 26th.  And it's not smart to enter a bay at night, but ignorance is bliss.

About 2:00, we decided to start our 3 hour watches.  We would soon be entering EST and that would put our changes at 3, 6,  9, and 12.  Dave took the first watch and I took a nap.  Just before my 6:00pm watch, I made us grilled cheese sandwiches.  I decided to add some summer sausage meat-that was a mistake.  There was just enough fat or spice or something that didn't sit well with either of us.  I started my 6:00pm watch and had put on a couple Christmas CD's to sing along with.  As it got dark, the seas became more rough, which made the boat rock side to side.  Dave said he didn't sleep much.  At 9:00, Dave started his watch and I tried to sleep, but didn't much either.  When I got ready for my 12:00 midnight shift, we were really rocking and rolling.  By the time I made it outside and to the helm, I got sick (for the first time) over the starboard stern corner of the deck.  And it hit me 2 more times on that shift.  I also prayed the rosary during that shift.  Throughout the night, we would just sit behind the wheel and stare at the radar, nod off occasionally, and 3 hours went by OK.  We were both able to catch some sleep during our other off times.

Below, I tried to take a picture of  my life jacket with the tether to tie me to the boat.  I'm wearing a yellow jacket.  Then the blue and yellow life jacket laid flat over that.  There is a tablet holding a lever open, if it dissolves in water, it will open a CO2 cartridge that will inflate the vest.  That way it is more comfortable to wear un-inflated.  When I was on watch at night, I would wear mine and even attach myself to the boat.  Dave just had it handy.  BUT, at anytime, day or night, if one of us goes forward on the boat while out to sea, you wear the jacket and tether into a jack line.  That is a webbing that runs the length of the boat on both sides.  There is a shackle to attach to the jacket and then a short and a long tether with carabiners.   Sounds like a great system if you go overboard, but Dave has read about people being drug under water, too.  So we also carry a knife.  (Don't faint Barb.) 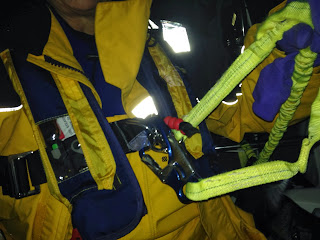 Somewhere in the middle of our passage, I panicked thinking we wouldn't have enough fuel to make it if we motored all the way.  After thinking through how many hours we motored before we last refueled, Dave reassured me that we would have plenty of fuel.  We are carrying 10 gallons of diesel in cans that we can use (and we did).

During the day on Thursday, Dave put out the sails.  We were able to lower our engine rpm's and actually increase our speed.  We had been motoring at 6 knots but were often in the 7 range with sails and even into the 8 knot range occasionally.  He also saw dolphins several times on his watches.  When I got up for my 6pm watch on Thursday, Dave let me sleep a little longer.  He was feeling great and wanted me to be rested when we came into the harbor.  So I got up about 8:00, and we brought the boat into Clearwater together.  Seeing the lights on the shore was pretty and we were so thankful to see land.

There are red and green channel markers.  Some are lit and others aren't.  So I would have a flashlight looking for the unlit markers.  They reflect great with a flashlight once you spot them.  We checked our Active Captain app on our phones for a good anchorage and went directly to a great spot.  We were anchored by 11:00 pm and had a very calm night.  From the time we left Panama Beach and anchored in Clearwater Bay it was about 40 hours of nonstop motor/sailing.
Here's the little island we anchored by and found in the dark.  This was the next morning. 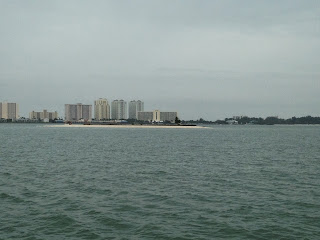 Even though I was sick, we felt like this was a great accomplishment.  We don't foresee that long of a passage offshore for quite some time.  And it feels great to be on the west coast of Florida.  The area we came into is exactly where I would stay to work with a dental consultant.  I made about 4 trips here.  It was strange seeing these familiar landmarks from the water.

I'd like to quote part of one more Jimmy Buffett Christmas song.  It's titled Merry Christmas Alabama, but I am going to use SD.

Merry Christmas, South Dakota
Though far from you all I have roamed
'Tis the season to remember
All the faces,
And the places that were home

Guess my life's moved at near light speed
Since I started this wild and crazy run
Such a long way from that first birthday
Merry Christmas, everyone
(trivia-Jimmy Buffet was born on Christmas Day)


Posted by svluckofafool at 8:31 AM