Happy Anniversary to Dave and Mary!!  36 years!!
To test our marriage, we are going to do our first passage with rotating watches.  To follow the intracoastal waterway between Pensacola and Panama City, Fl, you have to go under a 50 ft bridge.  Our mast is 53 ft, so we  have to go outside on the Gulf of Mexico.  We were not sure how long this would take.  We were told it was about 100 miles.  And if we only go 5 knots, it will take us 20 hours.  But if we have the right wind, we could use the motor and sails and go  6 or 7 knots, which would shorten the trip.  We didn't want to arrive in the dark, so we decided to leave between 10 and 12:00 in the morning.  Then we would  arrive early morning in Panama City.

We had everything ready to go and were anxious to leave while the weather was good.  So we left at 10:45 am.  It was 57 degrees and we had a 6 knot wind on our backs.  Actually not the best wind for sailing, so we motored.  We headed into Pensacola Bay but immediately turned south out through the channel.  We had the Pensacola Bay light house behind us.  I had toured this with Cheryl Ulmer last January.  We also had dolphins escort us out of the bay.  By 11:30, we turned east for  Panama City.  Dave wanted to go 3 miles off shore because it is then legal to empty our holding tanks overboard.  (hush to all you environmentalists, the sea life love it).  About 1:00 we decided to set sails along with our motor.  This helped us go from 5 to 6 knots.  Dave and I played around with our new electronic navigation charts and radar.   We could pick a spot outside of the Panama City entrance to their bay and mark it as a way point.  Then we could tell our auto pilot to navigate to that way point.  Then the boat takes over the steering.  Much better than driving across South Dakota.  You can walk around, eat, send texts, even go to the bathroom.

We have an AIS.  It is an electronic device that identifies other ships with an AIS.  And it tells them where we are and who we are.  Well it took off with an alarm twice within the first couple hours.  And sure enough there were ships crossing our path.  One was a ship that is made in Mobile by Austal.  It is used for chasing pirates on the ocean.  They look like a miniature battle ship and can move really fast and are designed to do high speed turns, which larger ships can't do.  It was cool to see one out here.

We decided we would take 3 hour watches started at 3:00pm.  Dave started the 3-6:00 watch.  We had made our dinette into a bed to be able to sleep on when you were off your watch.  It is more centered in the boat, so a smoother ride.  But also, you would be close to the cockpit to help if needed.  So I checked it out with a nap that afternoon.  I got up in time to catch a beautiful sunset behind us before 5:00.  Then I had a chance to review how to follow the charts, etc, before Dave took his break.  We also decided to take down the sails so I wouldn't have to deal with them on my watch.  6:00pm was my first watch by myself.  Since it was dark, it was easy for Dave to go below and crash.  We were between Ft. Walton Beach and Destin, but about 12 miles off shore.  You could still see the condos lit along the shoreline.  The coast line curves between Pensacola and Panama City, but if you take a direct line to Panama City, it takes you off shore a ways.  The most depth I noticed was 115 feet.  But it wasn't scarey.  It was very beautiful with the full moon.  The time actually went fast for me.  At 9:00, Dave was still asleep.  Since this was my first watch, I wasn't sure if I should wake him, or just keep going, since I wasn't tired.  He woke up at 9:30 and said I should have woken him up.  So by 10:00 he was ready to relieve me for a 3 hour watch.  I went below and set an alarm for 2 hrs and 45 minutes.  I'm not sure I really slept, but I must have part of the time.  When I woke with my alarm, the water was much more rough.  Earlier it was only 1-2 foot swells.   Now we had 2-3 foot swells.  Dave yelled down to  me that we were at Panama City and he needed my help up above.  Turning into the channel for St Andrew Bay also changed the wave action making it more rough.  I really had to hang on to get dressed and outside.

We were both surprised that we arrived so early.  Now we had to find a place to anchor in the dark instead of pulling right into a marina.  Dave has an app on his phone called Active Captain.  People send in their current information about areas, like marinas, restaurants and anchorages.  So we checked that and decided on an anchorage east of the channel and on the north side of Shell Island, a state park.  I am usually at the helm while Dave is lowering the anchor.  He uses hand signals for me and I was worried I wouldn't be able to see him.  But the full moon helped.

We were anchored by 2:15 am.  I sent a text to Brian Killion that we arrived safely, then headed for bed.  While Dave stabilized the dinghy on our davits, I rearranged the bedding back to our V-berth.
We made it and our marriage survived!! 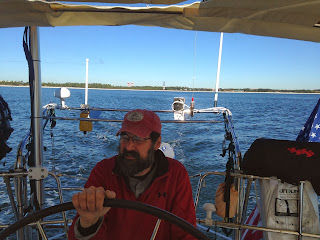 Our dinette made into a bed.  Also where company would sleep, since the aft berth has become our "garage". 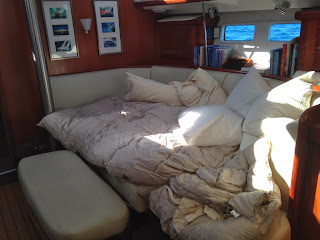 Sunset on the Gulf 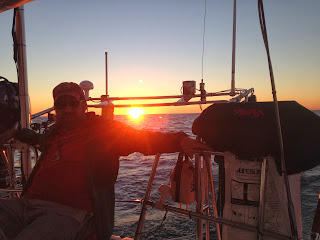 Full moon rising beyond our boat 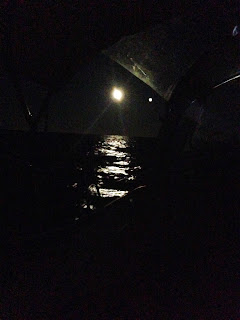 This is what you stare at during your watch.  You also scan the horizon for other ships. 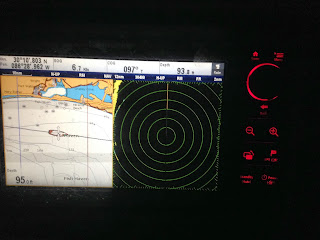 Posted by svluckofafool at 7:24 PM