Today we had the Renaming Ceremony for our boat.  We invited the owners of two other boats in the marina that we are friends with, 2 of our neighbors from our condo that we had for a year, and the people that work at the marina.  So there were 10-12 people present.

Dave started the ceremony with explaining that when we moved here, he had talked to the owner of this marina, Ed, about buying a boat.  He gave us the name of Murray Yacht Sales that helped us find and purchase this boat.  Plus we had the marina do some work on the boat for us.  So we wanted to thank everyone at the marina for helping us make this dream come true.   We then explained where the name Luck of a Fool came from (see Nov 23, 2013 blog).  We then read the following toast. "I name this ship Luck of a Fool and may she bring fair winds and good fortune to all who sail on her."  Then Dave and I went to the bow to spray a bottle of champagne on the bow.  Pictures were difficult because our boat had the bow out away from the dock.  And our dinghy was on the deck of the boat.

Everyone then joined us in the marina's common picnic area for wine and beer and some snacks.  The ceremony was short and sweet, but the party lasted a couple hours.

We have had two naming ceremonies before.  Our first boat, a 24 ft C& C, was named the Ruby Slipper.  It had a pretty red hull.  But several of our new sailing buddies were calling us the Slippery Nipple.  So we had to change it.  That boat was named Tequila Maria (yes there's a story there).  We held that ceremony at Angostura Reservoir, where we sailed for many years.  The people present at that ceremony have become lifelong friends through our sailing adventures.

Our second boat, a 25 ft Catalina, was named Get Away.  We thought we needed something more exciting.  We came up with HulaHula.  We had just been to Hawaii, so that was on our mind.  But there is a Jimmy Buffett song where he shouts Hula Hula.  We bought the boat in the fall.  That following spring, Dave and Pete trailered the boat to Florida for a sailing trip.  I was able to fly in and meet them, to save time off.  I discovered that there was going to be a Jimmy Buffett concert in Jacksonville, Fl in the time frame of our trip.  So that's where I flew into.  We took the boat to the tailgate party before the concert and had our renaming ceremony there.  Our good friends, Katheryn and Brian Sweeney from Orlando, joined us for the tailgate party and the renaming.  Of course the people around us had to join in also.  That afternoon, the concert crew filmed the people tailgating.  We made it on the jumbo tron screen during the concert.  Of course, we were the only boat in the parking lot.

So we have had some fun renaming ceremonies over the years.  At this time, we believe this will be our last. 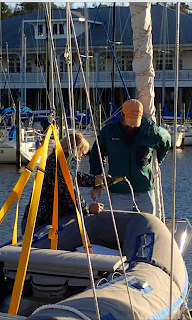 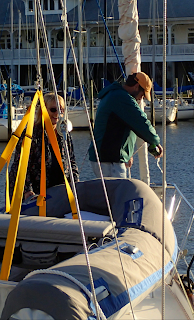 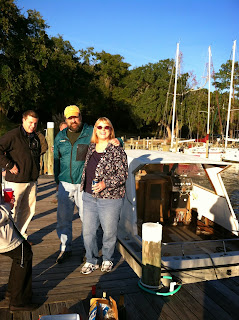 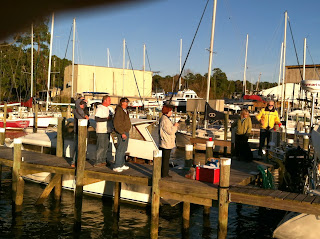 Posted by svluckofafool at 8:04 PM