Projects are being accomplished every day.  Again, most everything is on Dave's shoulders.  I keep the meals coming and run errands.  I did earn my badge by completing my third task (filling water tanks and trimming all the lines were the first two).  Third task- cleaning the dorades.  A dorade is on the deck and captures air and directs it below into our cabin.  There is a scoop on top that can be rotated into the direction of the wind.  It is mounted on a "box" that will catch rain so it will drain overboard and only the air comes into the boat.  Ours were covered in mildew.  One of the boxes even had a wasp nest on the inside.  Now we need to paint the outside.  My friend, Cheryl, would have been proud of the way I disassembled the units and reassembled them (knowing how spoiled I have been over the years).

Dave has the solar panels and the radar mounted.  We still need to repair the bimini in the spots where we had to go through it to mount the solar panels.  And that includes removing the solar panels first, repairing bimini, then replacing the solar panels.  He is connecting all the power for every piece of equipment that he added.  While running wires, Dave found another leak from a gauge on our fresh water tank.  He is repairing a leak in the holding tank for our head (waiting for parts) and still waiting for parts for the engine.  We are waiting for a forecast of a few sunny days in a row to put the name of our boat and our "hailing port" on the back of the boat.  Luckily, our neighbors used to own a framing shop in CO and will advise us on the placement before it is permanently fixed.  We would have liked to put Rapid City, SD on the back of our boat, but it has to be the city where the boat is registered, which is Daphne, Alabama.

Still hoping to be out of here before the end of the month.  We'd rather be working on the boat in beautiful blue water.  Here is a picture of the new solar panels and radar,  also during and after the dorades were cleaned. 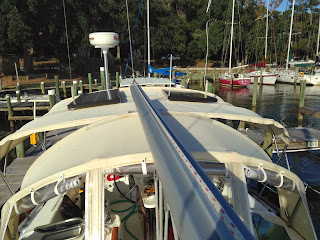 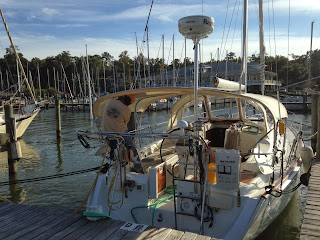 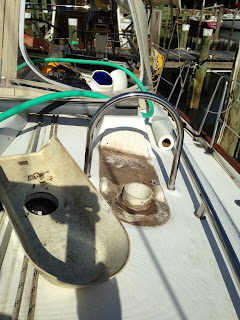 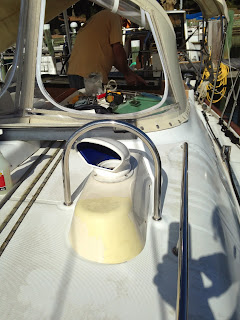 Posted by svluckofafool at 5:09 PM